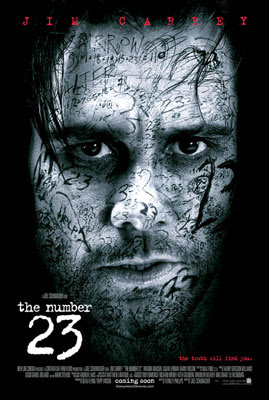 The Number 23 is what one would call a psychological thriller. Review for this movie is somewhat polarised, people who liked it loved it, people who didn't like it hated it. On an average, the ratings in IMDb was not that good, but I still decided to go for it because I really liked the premise, and I really like Jim Carrey.

A seemingly normal man, husband, father, one day chanced upon a book which seemed to be telling out his life story. Becoming obsessed with the book, he becomes obsessed with the number 23 and finds that the number 23 is all around him until the number finally takes over his life. We follow Walter Sparrow's journey in trying to track the writer of that book, and trying to uncover the real murderer as mentioned in the books, but the plot twists and turns from there.

The premise of this film is good. But somehow, there's a lack of development in the story which makes the plot a bit weak and somehow, I thought that the focus of the film just wasn't there. Most people who gave bad reviews for the film complained that the number 23 appearing everywhere is just too implausible, especially the part regarding the colour pink's association with 23. I agree that the number 23 and pink is not on the same table, but the thing is that that's the whole point! When someone wants to see something, he will make that thing will appear, no matter how implausible it is.

This film is not about the number 23, it's a film about obsession, just as the book says, it's about obsession, someone being obsessed over something. And obsession talking over the life of someone until the point of no return.

I liked the cinematography of the film too. I think the film was well shot, well paced and well angled. I don't know why some people thought that the film was draggy, maybe they didn't catch the gist of what the director and the scriptwriter was trying to imply, which I find it a bit sad because even critiques didn't catch that.

One thing I didn't quite like that the ending. ***spoilers ahead*** It was too good of an ending to be real, or at least entertaining. Maybe after that thrill trip along the route of the plot, I'd have prefered if the ending was in deaths, but it was a nice good happy ending, so it was kinda disappointing. ***spoilers end here***

Jim Carrey with this film has marked himself as an actor, not just a comedian, but a true actor. Seeing his past films like Eternal Sunshine of the Spotless Mind, and this one again, it's really good to see him maturing as an actor and being able to handle more dramatic roles. But don't go and see it just because it's Jim Carrey, just like Eternal Sunshine, this film isn't marketing itself as a Jim Carrey film, it's a film which just happens to use him as the main lead. 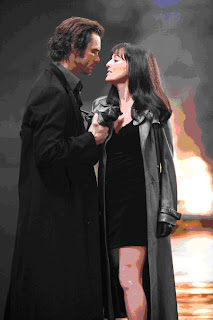 I really like Jim Carrey in this outfit, okay, I'd like any guy in this outfit. It's just so damn shuai. I don't know if it's true in real life, but it seems like in films and movies, and anime, all the detectives like to wear long black trenchcoats, a bit like Akai Shuichi like that. It's so dark, mysterious and alluring.

There's actually a bit of plot holes in this film, but I'm interpreting these as questions left open for the audience to ponder over. Some people who criticised the film to the bits didn't like it, I quite enjoy it actually, and so do most of the other people who liked the film.

Toward the end of the film, there are some uncanny coincidences, like the appering of the number 23, some people in the cinema laughed, but I don't really find it funny, and neither do I think the direct meant it to be funny. I guess to really like the film, one must see through all the so called cliches and understand that the cliches are there for a reason.

As what Yuko-san says in xxxholic and Tsubasa: Reservoir Chronicles, both by CLAMP, there is no such thing in the world as coincidence, only the inevitable. Maybe after seeing things in this light, this film might prove to be one engaging piece to watch.
Posted by xxoos at 9:50 pm