Black is the new black. Last month some time ago, I met up with Huijing over lunch, we wanted to go for this dum sum buffet somewhere in Harbourfront Centre, but we didn't know that that restaurant had a split shift and by the time we got there, they were closed for the afternoon break. Not knowing where else to go for dim sum, not having any other preferences in mind, we walked aimlessly around VivoCity in seach for food.

Then we came upon this restaurant called 黑社会. 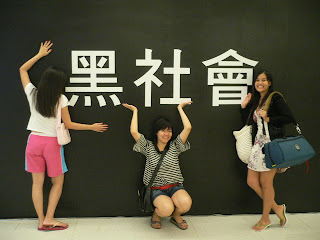 Before that restaurant opened, they had this very cool black boards over it and with only the words hei she hui printed there. Without any explanation for what hei she hui is, I always thought that shop was some upmarket gift shop trying to act cool. I didn't expect it to be a restaurant. By the way, this picture wasn't taken with Huijing, but taken on another occasion before the opening of this restaurant.

The restaurant features a cross between Shanghainese cuisine and a bit of usual Hong
Kong favourites, so I guess it's predominantly a Shanghainese restaurant, which is also weird for it's name, because I thought hei she huis come from Hong Kong, and the Shanghainese gangs have another name of their own, something like Shang Hai Tan or another cool name.

The restaurant is very spacious and has a couple of window seats facing directly at the sea, the ambience is not bad, and the prices are about the same as most other Chinese dim sum restaurants. Because there weren't many people there while we were there, the service was not bad.

What I like about the restaurant is the utensils used. The plates are so pretty~ And the teapot and teacups too. What I found was weird was the chopsticks. The bottom of the chopsticks (not the part you use to giap the food, but the opposite) is made of metal and is very heavy, so one must hold the chopsticks as high as possible, if not will offbalance. Either that or you must have good chopstick skills.

We ordered a pot of the recommended tea, and my god, was it good. It was some kind of ginseng oolong tea, but with every mouth, there is a sweet aftertaste which makes the tea very fresh and alluring. For a pot of tea with unlimited hot water refills, it's well worth the price. The teapot and teacups are also very small and cute and interesting. The tea leaves are in the centre of the teapot to absorb the water, but not to flow out of the sprout along with the tea, some kind of very interesting mechanism. The teacups were so tiny and cute, each cup contains enough tea for one mouth. hehehe...

Huijing ordered the custard buns which was supposedly their signature dish. The buns were very soft, like really soft. I don't eat custard so I have no idea how custard tastes like, but the custard buns filling tasted like salted egg yolk to me. It wasn't that bad, I only took a mouth out of Huijing's buns. But there's a little downside to the buns, the base of the buns sticks too much to the paper, so when tearing off the paper, the bun will tear easily and the custard will flow out causing quite a mess, and also wasting the bun skins stuck on the paper. Huijing also had some paigu lamian which isn't pictured. She thought it was not bad.

I had the hargau, changfen and xiaolongbao. The hargau was normal. I mean the difference between a good hargau and a bad hargau is only the har inside the gau so if the har is good the hargau will be good, there isn't anything special about it.

The changfen was very interesting. Instead of using normal white rice to make the rice roll, my changfen was made using red rice, so the rice roll was actually pink in colour. I had crab stuffings for the filling and well, it tasted not bad, as in the whole combination of the rice roll with crab stuffings. My gripe was that the waitress did not pour the whole pot of light soya sauce into the changfen until I told her to. She had poured like half the pot and wanted to keep the pot. As we all know, I'm a salt-eater, and I was sick on that day, I didn't want my food to taste that bland so I asked her why hadn't she poured the whole pot in.

I don't mind going back to that restaurant to eat again, but I don't think I'll make a special trip down to VivoCity just to eat there.
Posted by xxoos at 4:56 pm

haha i thought how come suddenly u missed us or sth. yuan lai~~~ anws ya i was quite shocked its a restaurant too! i tot the interior looked qt nice.. but didnt manage to try yet!!! shall try all those tt u ate. sounds nice!! :D

i also miss you la... hehe~
yup~ can go try it out some time, quite worth it.