I was down at the Kallang Stadium last night to catch the Lions in action, like real live action, the first time ever experiencing live action. When I was in Germany during the World Cup, I always thought that there was no way live action can beat seeing the players close up on the Big Screen and seeing all the dives and faults of all the players, but after watching live action, I must say, nothing beats life action. This respect alone, I'll work towards my dream and one day sit in the stadium and watch Chelsea trashing some other team, or head over the Bremen and see the magic of the Green-Whites.

Thanks to Yanwei for getting the tickets for all of us, even though I don't know everyone whom you bought tickets for. Thanks everyone for choping places for me and those who came late. Quite paiseh to Yanwei because while the girls managed to squeeze into the benches, he has to settle for sitting on the steps and get in the way of everyone who wanted to go out. wahaha~ 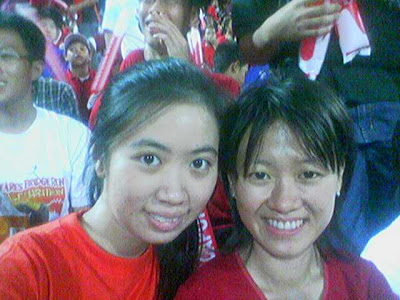 Me with Shuyi, there are more photos with her, so until I get them from her ba~

It was quite fun because the guys seated above us, whom we don't know gave use a couple of those air bats, or whatever you call those stuff. I tell you. Everytime I watch on teevee, I always wonder what are those thundering noises after the game without fail. I always thought it was some wind or something. I realised finally yesterday that the thundering noises are the noises created by bursting those air bats. wahaha~ It's so cool man.

Actually, while waiting outside the stadium for Yanwei to pick me up, and I haven't met the others who were late, I was a bit upset. Standing in the middle of everyone who were with a whole group of other people was quite depressing. I almost wanted to leave immediately. What was worse was that the network in that area was so screwed that I can't call anyone and SMSes took ages to get through. I spent like half an hour just dialing Yanwei's number. But once I met the latecomers and once Yanwei came and picked us up, and once I was seated and watching the match, all those unhappiness just disappeared. This tells me, next time better not be late. wahaha~ My own fault my own fault.

On to the match proper, the first goal was just so cool. Following the player right up to the box and seeing the ball go behind the net was just awesome. And that everyone around you just stood up and cheered, the atmosphere was just so cool. I think I'm sounding like a sua ku now, but hey, this is the first time I'm at a match okay. Okay, in Germany, the atmosphere was just as great, but well, the players weren't real, were only figures in a screen.

But then hor, I think the Singapore fans aren't as passionate as the German fans. Although we saw some interesting get ups by some Singapore fans, they paled in comparison with what the Germans wore to the Big Screens, it wasn't even to the stadium. In the after match also, the Germans can go on cheering till dawn, but after the match all the Singaporeans just disappeared. In Germany, the fans will even take the street and sound their horns and go on all night, but in Singapore, the match just ends. I bet some Singaporeans don't even know that there's a match. But then again, the ASEAN Football Championships isn't really the same thing as the World Cup. hehehe~

The referee that night was bad. He was a Malaysian, and for a moment, I thought that he wanted to revenge that night when we kicked Malaysia's ass with the last penalty save by giving us bad refereeing. There was this moment when Singapore had a clear call for penalty but it wasn't awarded to us. Then there was all those shameless falling down and getting mysterious injuries to those Thais and the referee didn't caution anyone of them for playacting.

Then there was that shameful walkout by the Thais. They're acting just like spoiltbrats. Seated in the stands, we were still quite blur about what was going on. But really, I think the Thais ought to be disqualified for having no sportsmanship, then we can just forget about the second leg and Singapore can defend our crown without playing the second leg.

There are still quite a lot about the Singapore team I'm dissatisfied about. There were little good crosses and Singapore can't really defend their possession, it was so obvious seeing those mistakes live. There was this free kick that was to be taken. Instead of sending the ball straight into the box for someone to head it in or knock it in, Singapore chose to dribble the ball to another angle to send it to the box. The problem? Before the ball got to the other person to cross to the box, possession was snatched away by the Thais. This happened in quite a few of the corners too.

There aren't any good players like those from the Premiership we are so familiar with who can knock the balls so precisely into the box into the head or path of a good finisher.

Last night was indeed a night of good football with Chelsea claiming a 3-0 win over Blackburn and keeping up in the title chase; and Werder Bremen came in 2-0 away win against Bayer Leverkusen and kept themselves in the top place though tied with Schalke they are ahead in goal difference. No one in the Bundesliga can even come close to Werder Bremen in goal difference lor. wahaha~

Anyway, hope come this weekend, Werder Bremen can knock in a couple of goals against Schalke and be the sole team at the top of the table. Although my eyes would be on the Thai-Sing match instead.
Posted by xxoos at 9:54 pm