Four Weeks of School: A Roundup

With today's class, I've rounded up four weeks of school in this new term and first time as an honours student. I just found of the perks of being an honours student is that I can now borrow up to 14 books for up to 4 weeks. wahaha~ I can hoard! Okay, I don't like to hoard because books are heavy, I print them copy them instead. Lighter to carry. A new habit of mine, I now print double sided because it's lighter. I'm accustoming myself to the whole new life of an honours student! wahaha~

I did the back to school post already but haven't given an in depth discussion about the modules, so that shall be it tonight. 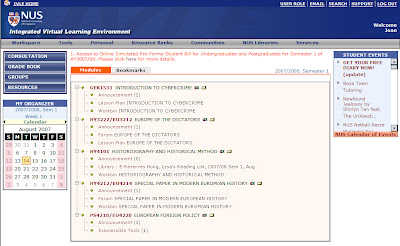 Introduction to Cybercrime
I regretted taking this module, but then since it's not examinable and I need to go a breadth, then no choice. This module is pretty boring, at least to me. I tried so hard to stay awake during the first lecture, then the second lecture I had to bring in tons of sweets and chocolates to entertain myself. The third lecture was the ultimate, I had my laptop with me, so well, you can guess what happened. The fourth lecture I was worse, I was playing handphone game. But at least I did try and listen, multitasking.

Europe of the Dictators
The scope of this module don't seem to be what I expected, or at least for the part on Russia, I thought that there's too little talk about Stalin, and his whole regime. Much of the lectures went on about the Civil War, Lenin, and the Communist Party on the whole. And there isn't anything fresh to be learnt of it, everything seems to be stuff that I've been going through in various different modules. But the tutorial discussion was not bad, with my only gripe that the lecturer talked too much and gave less airtime to the students when I think my tutorial class was filled with very vocal people, especially the year fours, there were plenty of them.

One thing bad is that I don't know why but everytime during the lecture I'd be very tired and doze of a bit. Not much though, just a bit. I don't really want to use coffee to keep me awake because for a 12pm class, coffee doesn't really sound that worthy to be wasted. I must think about other means to keep myself awake. Maybe get Aikhui to poke me or something. haha~

Historiography and Historial Method
The module is very dry. I know it might be useful to me if I intend to do an ISM, but being the only non-history student in the class does sound pretty sucky on paper. But some topics within the Histo class isn't really as bad as the module on the whole, so it's still quite okay.

There are quite a number of gripes about the class, one thing is the lack of discussions, at 60 people in a class, it's not condusive to hold class discussions if there were any, and the lecturer has the tendency to talk too much and go on too long and the students' airtime is then limited. There was once we had group discussions which I enjoyed, but it was only for one week, the other weeks were so pressed for time.

British Prime Ministers
The introductary lessons were a bit of a drag but I must say that they were necessary since I don't bother too much about British politics, but if the presentations to be held every week were to be like what we had last week, then I think the class would be so much more fun. My group had the honour of being the first group to present. It's not too bad a thing other than I was dying in the third and fourth week of school, but clearing that major hurdle would be to ease up my time and space in the future weeks.

The presentations were fun. Okay, I had fun even though I was too rambly and lengthy and didn't get the opportunity to conclude, but I thought it weren't that bad. The Q and A session was a riot man. 4000 classes are indeed 4000 class, everyone has something to say and everyone has something useful to share and everyone discusses. I like discussions! I can voice my own opinion, learn from others' opinions, and better still I can keep my mind working by thinking and talking and not fall into auto-pilot mode. Just a bit of a whine, I got shot left right centre during the Q and A. Either my essay's filled with holes, or my topic's just too interesting, or people hate me.

European Foreign Policy
It's quite funny that I'm saying this is one of my favourite modules. I'm learning a lot from this module which I can't say quite the same for the other modules I'm doing. There's a lot of new things being brought up and I'm interested in knowing more, and I feel like I've gained something when I walk out of the classroom. Perhaps another reason for me to think this way is that we started the presentations on the second week, so presentations means more fun in the lessons. Another probable reason could be that I don't have much pre-knowledge of stuff about the contents of this modules to begin with, so everything is new to me.

Okay, with one essay down, one presentation down, one critique down, next up would be more essays, more presentations, more tests. Jiayou Joan, keep the pace and be a guai guai student this semester!

The essay wasn't that bad even though I sounded like I was dying when I was doing it, in between moanings and groanings, joanings finally completed it almost in time, well, the others were late too so it isn't that bad. The critique was quite a surprise, I actually finished it withing two hours, with footnoting and bibli and formatting. But it's 800 words only la. But I read both pieces of material each twice, and some time before I had already mentally mapped out what I wanted to touch on, though I didn't pen the thoughts down. A bit wasted that it's only 800 words and I found it difficult to be really analytic and go deeper, but I'm still pretty satisfied with my work. At least it's over and done with.

The engine is running for Joan~ Jiayou!
Posted by xxoos at 1:54 am

Hey, I was also at the discussion that day for the British Prime Ministers module.

Just want to say that your view was on the more controversial side, that's why everyone had something to say.

Well, at least you demonstrated that we should take the middle road when writing essays.

i think eden is a more controversial figure because writings from the 60s and 70s are quite a lot different from the more recent writing of the late 90s and post 2000s, mainly because of the releasing of documents. don't think many of the later prime ministers will have such reviews.

yup, good advice for everyone presenting after the first group~ but if everyone presents so safely that there's nothing to discuss about then the class won't be that much fun leh... hehe~